We were mentioned in the sidebar to an article in USA Today which appeard on November 29, 2004.

Trendy to tacky to kitschy

MANITOWOC, Wis. â€” Three giant Budweiser bottles are painted on the brewery towers that loom at the end of Washington Street. Some of the locals say they’re symbolic of a town that has seen better days: three Buds shy of a six-pack.

This town of 33,000 was known as the Aluminum Cookware Capital of the World, but it’s ultimately being remembered for turning out more aluminum Christmas trees than anywhere else.

At the height of the rage in the early ’60s, as many as 300,000 tin Tannenbaums were made here during “tree season” â€” July to November â€” bringing new meaning to the term “Tinseltown.”

No more. The last aluminum plant closed only last year, but the production of aluminum trees ceased decades earlier, victim of the “back to the land” movement of the early ’70s.

The trees, though, still shine in some people’s eyes.

Julie Lindemann and John Shimon returned home 15 years ago. The two grew up here along the shores of Lake Michigan, 90 miles north of Milwaukee.

They still look more East Village than eastern Wisconsin, she in her cat’s-eye glasses, he very much a young Andy Warhol. And both still dress in Manhattan black, of course.

But here they are in their storefront studio at 719 York St., doing what they do best: photography. Moody, edgy, quirky photography.

By the time the two artists came home to set up shop, the once-trendy trees were turning up, too â€” at rummage sales, barn auctions, antique shops. It was then, as they like to say, they had an “Aha!” moment.

To them, the tree was not only part of their own past but also an art form worthy of exploration. Something not only to behold, but to photograph. The result: Season’s Gleamings: The Art of the Aluminum Christmas Tree (Melcher Media, $16.95).

“But we weren’t really trying to celebrate a local product,” Shimon says.

On a recent evening, a couple of hundred nostalgic souls lined up at LaDeDa Books & Beans to hear the two photographers talk and sign copies, often multiple copies. Many were women who worked at the Aluminum Specialty Co., where Evergleam trees were made.

An accordion player accompanied Ginger Baryenbruch as she sang the Aluminum Specialty Song, a tune she says she and fellow gals on the line used to sing to pass the time. It’s to the tune of Glow Worm:

There was even a confessional period during which one woman stood up and admitted she had just paid $800 for a hard-to-come-by pink aluminum tree. She wouldn’t give her name because she said she’d like to remain married.

But for Shimon and Lindemann, the book is something else, a somewhat bittersweet look back at a time when the town was thriving and aluminum â€” whether in a pot or on a tree bough â€” was king.

Lindemann and Shimon bought up as many as 40 castoff trees when they returned and set up an “aluminum forest” in their studio for Christmas. They started taking photos of them with an 8-by-10 view camera, hoping “to portray the people and landscape of this place where we’d been born.”

The locals started driving by every evening as if viewing Simon Doonan’s famed holiday windows at Barneys New York.

The photographers are philosophical, if somewhat amused, about the attention the book is receiving. CNN paid them a visit this month. CBS’Sunday Morning also is coming to call.

“It might be the best we do,” Shimon says when asked whether he’s worried that they’d become known only as those “aluminum-tree photographers.” Says Lindemann: “There are a lot of other things we’re concerned with here.”

You have only to visit their Web site (shimonlindemann.com) to see that’s true. The two usually photograph not local products but the locals, often the more disaffected young residents, some of whom end up in state prison.

But at the moment, aluminum trees are it, and they’re running with it. They know the emotions the trees evoke in townspeople.

Former employees of the Aluminum Specialty Co. began stopping by to share stories when the studio was all aglow, and that included engineer Richard Thomsen, 80, the man who gave the go-ahead for the original Evergleam tree project.

Today Thomsen says he’s “flabbergasted” by all this attention being given to his tinsel trees. The night of the book signing, he couldn’t even find a place to park.

Thomsen still sets up his 8-foot prototype, a tree that was never marketed because it was too tall for the ranch-style homes of the day. The Wisconsin Historical Museum in Madison would like it, but Thomsen says they’ll have to fight his three children for it first.

Manitowoc’s mayor allows that some residents don’t recall the tree years with such fondness. “It wasn’t very pleasant work,” Kevin Crawford says. “People kind of moved on from that space-age era.”

“I was the winder, meaning I wound the branches,” says Graykowski, who made $1.59 an hour.

She worked the third shift, from 11 p.m. to 7 a.m. The process involved gluing and winding strips of aluminum foil needles on wire rods to form branches.

“You had to be fast,” she says. “Real fast. It was hard work, dipping those rods into a hot pot of glue.”

Whether Lindemann and Shimon are responsible or not, the trees are popping up around town again.

Lisa Genske has nine in her front window at the Washington Street Antique Mall. Some silver. Some red. Some green. Plus two original color wheels.

“My parents had a silver one, and they did what everyone did,” she says. “They finally threw it out.”

None of Genske’s trees are for sale, despite the fact that customers ask almost daily. And some aren’t cheap. A 6-foot pink pompon tree (they have the extra burst of aluminum at the end of the branches) in good condition can fetch more than $1,000.

Across Washington Street, Tina Kugler, a cartoonist who just moved back from Los Angeles, put an aluminum tree in the window of her new children’s bookstore, Tweedle Bros.

“I’ve wanted one forever, but my husband always said no. He’s a purist,” Kugler says. In L.A., “they’re everywhere.”

The next day Jean Brauer was setting up an aluminum tree display at the Rahr-West Art Museum across town. Her mother also worked on the tree line.

“I think of my mother whenever I see one,” says Brauer, who has been known to give vintage aluminum trees as wedding presents. “They look cold, but they have warm roots to me.”

Bev Denor, owner of LaDeDa, where a rotating aluminum tree adorns the store window, doesn’t have such warm memories. “I remember my dad bringing one home and all of us sitting around it, looking kind of sad,” she says. “And then my mom finally said, ‘You have to go get a real tree. This just isn’t working!’ ”

As for Lindemann and Shimon, they also know that everything that glitters is not gold. Or even silver.

Shimon confesses: “I was never really that fond of these trees myself.” 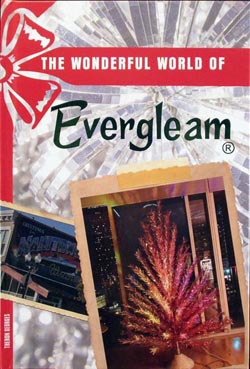